I’ve been riding dirt bikes for about 33 years now, my first bike was a 1977 Honda XR75, and although its suspension was pretty rudimentary, I suspect it was well suited to the engine output. Of the 30 odd new dirt bikes I’ve bought and owned over the years, I’ve only ever spent money on making more power and noise, never once have I spent money on suspension! I figured to go fast you have to have the maddest engine to spray rocks and dirt all over your mates.

Well this time, having figured the 500 makes enough power to please anyone, I did some research into upgrading my suspension to see if it actually made a difference to my speed and also to see if it would enhance my trail riding experience.

With my bike’s stock suspension I noticed that after a few loops of an enduro trail, the front end of the bike would deflect savagely off of roots & rocks etc, this is no doubt also attributable to being wrecked and barely being able to pull the clutch in but still it was scarily noticeable. The front end would also bottom out in bigger whooped out sections, bottom line – the set up was harsh yet still didn’t resist bottoming. Corning on this bike just never seemed right either, it pushed the front wheel through or slid the rear end out too far – poor technique also to blame here I suspect.

So I made some (many) enquiries and decided on going with Chad’s Offroad Setups. I chose Chad as he actually wanted me to spend less, noting that with my weight (80kg) the stock springs are the correct rate, its the valving that’s the issue. That and also setting up Ben Grabham’s KTM’s to win Finke seemed good enough credentials for me. For less than $500.00 I had my forks and shock waiting for me when I got home from work last Thursday. I banged them back in and lined up a mate to head south and test the set up on the same tracks I had ridden before removing my suspension, keeping conditions consistent.

I was expecting big things, and to be honest, straight up I thought I’d been dudded. It wasn’t until I had warmed up and got through that gumby stage that I started to notice things were definitely better, as soon as I started to get the pace up and hit obstacles harder she started to flow and glide like never before. The bike even turned, braked and hooked up much better than before the mods were done. And at the end of the day (before running out of petrol – Thanks Oggy!) there was no clanging off roots and rocks when totally knackered.

So, all up I think its definitely worth the money and effort. The suspension comes back all set up, the complex and bewildering array of clickers and pre-load adjustment are already set for you, all you do is bolt up and ride. Just don’t bullshit about your weight and you’ll be good to go. 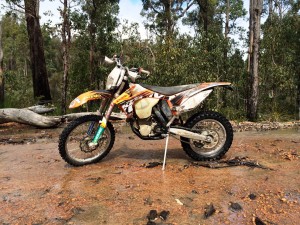